After an exciting start to our seminar series, we are very much looking forward to our next session… Unfortunately, our scheduled speaker, Anna Maerker (KCL), has had to cancel.

Our new speaker has kindly stepped in at the last minute, so the schedule can continue as normal this Tuesday at 6pm:

Alexander Wragge-Morley (UCL) – ‘The Utility of the Spleen: Medical Knowledge and Aesthetic Judgement in Eighteenth-Century London’

This paper stakes out a new approach to answering questions about the
interplay between aesthetics and medical expertise in early 18th-century
London. it is well known that famous medics such as John Woodward,
Richard Mead and William Stukeley drew close connections between the
articulation of medical expertise and the capacity to form appropriate
judgments about the value of art objects, books and antiquities. Little
attention has been paid, however, to the role of medics in framing,
through their alleged knowledge of the body’s appetitive and sensory
functions, framing the forms of embodiment appropriate to the pursuit of
medical knowledge and art appreciation alike. In this paper I therefore
examine William Stukeley’s ‘Of the Spleen, its Description and History’
(1723), a work that attempts to conclusively demonstrate the
much-contested utility of the spleen in the animal economy. Stukeley’s
efforts to prove the utility and beauty of the spleen point out some of
the ways in which medical discourse helped to shape – and even
pathologize – the role of the body in the production of knowledge and
the perception of beauty. I therefore suggest that the dilemmas of
embodiment at work in aesthetic discourses and the empricial sciences
were important to the constitution of medical expertise

Alexander Wragge-Morley is working this year as a lecturer in early
modern intellectual history at UCL. Alex has a PhD in the History and Philosophy of Science from the University of Cambridge, awarded in 2012. He did both is undergraduate and masters degrees at KCL. He has taught at the University of Oxford and held a postdoctoral fellowship jointly at the California Institute
of Technology and The Huntington Library, San Marino, CA.

Alex’s research focuses on questions about the role of emotional and
aesthetic kinds of experience in the production of knowledge through
practices such as natural history and medicine. He is currently
finishing his first monograph, Aesthetic Science: Representing Nature in
the Royal Society of London, 1650-1720. This book challenges the
historiographical consensus by showing that naturalists affiliated to
the Royal Society of London saw the representation of nature as a deeply
aesthetic project, shaped by concerns about purposiveness, beauty, and
pleasure in sensory experience.

We look forward to seeing you there!

With this series beginning next week, we are very much looking forward to welcoming you all to King’s over the next term. There has, however, been a slight timetabling overlap with our room, which means our seminars will now start at the later time of 6pm. We hope that this will not cause a problem, and apologise for any inconvenience this may cause. Otherwise, have a great weekend and see you on Tuesday!
— Alice and Philippa 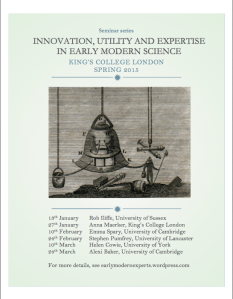 Questions surrounding innovation, utility and expertise at the intersections of science and commerce were of crucial importance in early modern Europe. Specialist skills and knowledge were increasingly consumed and commercialised as demands for information intensified, and this had significant effects on social, cultural and intellectual interactions across society. As new combinations of people and knowledge were created or criticised, myriad authorities were constructed, reinforced or disseminated in a wide range of ways. Individuals involved in social and professional transactions had to overcome a variety of tensions between utility and authority, as agents of many different backgrounds competed and collaborated within overlapping marketplaces of skills, knowledge and expertise. In natural history, medicine, art, chemistry, agriculture, trade, and many other areas of knowledge, contentious debates over value influenced social interaction, structured innovation and mediated expertise.

This seminar series aims to showcase and contribute to the growing scholarly work in this area by bringing together historians of differing cultural contexts to examine these movements in detail, thereby drawing links across a variety of forms of the creation, preservation and exchange of information, experience and skills in various linked communities of knowledge in the early modern period.

This paper examines the role played by craftsmen, engineers, and instrument-makers in making London the most innovative centre of craft activity by the early eighteenth century. Recent accounts of the Scientific Revolution have explored the breadth and complexity of the transformation of natural knowledge in this period, but they have failed to recognise the nature and impact of the single largest contributor to these revolutionary changes: the role played by instruments, their makers, and most significantly, the innovative ‘culture’ from which they emerged. This paper aims to give a broad account of the forces that shaped the development of scientific material culture in London during this period, from the skills of the individual makers to the techno-scientific machinist fantasies of both natural philosophers and the utopian writers of proto-science fiction. I look at the social, technical and economic contexts in which excellence in certain types of London manufacture arose, an approach that draws from the usual sources but also from urban history, economic history and the history of technology.  Secondly, I look at the role of natural philosophy, whose practitioners evidently enjoyed a complicated relationship with instrument-makers and their products.  Thirdly, I look at how skilled work in London was implicated in a much broader set of European activities; written information about the achievements of European competitors found in letters, books and journals spurred on London practitioners to improve their art, while personal contacts  were also crucial for the transmission of information.

In the eighteenth and nineteenth centuries, models of the human body were considered to be of significant public utility, served a range of purposes from medical training and public education to the eradication of superstition. But how could the best anatomical models be achieved? Historical actors such as anatomists, modellers, administrators and members of the general public established different accounts of how models were made and improved. Was a good model the work of individual scientific or artistic genius, or a collaborative achievement? Was it the result of a bright idea, or of patience and hard work? Should modelling be done at a state institution, or by private enterprise? How important was the role of materials? This paper describes how accounts of innovation in anatomical modelling changed over time, and investigates the effects these accounts had on the institutional contexts of modelling projects.

This paper addresses the way in which making, controlling and writing about poisons in Paris between 1670 and 1789 created both opportunities and crises for scientific and medical claimants to public expertise. The capacity of poisons to evade detection, to work invisibly in undermining the health of the individual or public body, and to subvert existing power relations made them unreliable proxies for groups and individuals seeking to constitute themselves as knowledge experts. Those who did lay claim to knowledge about poisons risked public censure; the subtleties of the apothecaries’, distillers’ and cooks’ arts, their claims to expertise over the distinction between poisons, medicaments and foods, and their skills in manipulating and re-producing these categories, made them prime targets for charges of poisoning in the late Old Regime. Physicians and botanists, by contrast, ‘neutralised’ poison by presenting it as a problem of wrong conduct and ignorance among consumers, one which public enlightenment in matters of health and natural history would resolve. Poisons, both literal and figurative, particularly preoccupied those critics of French courtly politics who, like Jean-Jacques Rousseau, were deeply invested in constructing Nature as the sole authentic foundation and guarantrix of moral, social and political order. For such reformers, the existence of naturally venomous plants such as fungi posed a particular problem, especially in the face of theologically heterodox works which used them as evidence of divine malevolence.

Francis Bacon left unfinished his New Atlantis but with the restoration of Charles II in 1660 it was ‘Continued by R.H. Esquire’. In the first half R.H. added the ‘platform of monarchical government’ planned by Bacon, which invited Charles to rule like King Solomon. In the second half R.H. provided an extensive description of Solomons House, centred on the lavish investiture of one Verdugo, the ‘triumphant inventour’ of flame-proof paper. Historians have neglected the treatise, perhaps because the author is unknown: the most frequent, obvious but misguided suggestion has been Robert Hooke. Another reason is in R.H.’s vision the heroes of the institution are not gentlemanly experimental philosophers but projectors and inventors of unspectacular though useful improvements: these alone justify their high status and large incomes. Albeit that R.H. was an ardent royalist his vision is much closer to that of Samuel Hartlib’s circle than the Royal Society’s, and it points to other communities of knowledge makers in seventeenth-century England. In this talk the identity of R.H. will be revealed. When we know it, and his successful negotiations with the Stuart court, New Atlantis Continued opens a window on the intersection of science and commerce. In his life and works, R.H. dealt with the tensions between science and technology, self-interest and philanthropy, private and public communication, private enterprise and state control, and support for and resistance (including religious resistance) to the growing number of projectors. The talk will explore these themes.

10th Mar – Helen Cowie (York): ‘Where the Woolly Things Are: Studying and Exploiting Alpacas and Vicuñas in Colonial Spanish America’

When Spanish conquistadors arrived in America in the sixteenth century they were confronted by a stunning variety of new plants and animals previously unknown to Europeans. Among the most notable and surprising were the camelids of Peru – the llama, alpaca, guanaco and vicuña – exploited by the Incas for their meat and wool and accorded a prominent part in Andean religion. Focusing on the colonial era, this paper examines how the Spanish represented, classified and used Peruvian camelids and considers how knowledge about the llama and alpaca was accumulated and transferred between cultures and continents. I explore the use of camelids as beasts of burden in the silver mines, sources of bezoar stones (valued as antidotes to poison) and providers of high quality wool and discuss attempts to naturalise the vicuña and alpaca in Spain in the late eighteenth century. I use the case study of Peruvian camelids to illustrate wider process of natural knowledge exchange within the Hispanic World.

In 1714, the British Parliament rejuvenated the ‘search for the longitude’ by famously establishing funding and rewards of up to £20,000 for improved methods of estimating the longitude coordinate of a ship at sea. Individuals from diverse backgrounds proposed new methods and instruments, and later other improvements to navigation and technology as well, in pursuit of the new funds. These ‘projectors’ ran the gamut from mariners, mathematicians, and instrument makers – people with relevant learning and experience and often vested interest – to armchair philosophers, religious visionaries, and charity-seekers. As a result, most longitude actors’ motivations intermingled self-interest and public utility. The combination sometimes sat uneasily with the individual and institutional players, and the broader public, who passed judgement on their expertise and on the validity of their proposals. Judgements about authority and innovation could also be influenced by factors such a projector’s profession and education and even socioeconomic standing, trial results on land and at sea, expert and practitioner testimonials, institutional approval, public opinion, and at times publications and patents (which could be a double-edged sword). This paper will explore the complications in establishing expertise and in collaboration within the diverse longitude-related milieu included conflicting cultural viewpoints – such as those of the artisan or inventor versus those of the bureaucrat.

The seminar is being organised by KCL History PhD students Alice Marples and Philippa Hellawell in association with the Centre for the History of Science, Technology and Medicine (CHoSTM) at King’s College London, as part of its research seminar series.